For the past few days I’ve been working on a data visualization that displays Elasticsearch node distribution across different cloud instances and zones. This article shows off the visualization, the color generation script, an interesting performance issue, and the solution I arrived at.

This article was originally posted on the Elastic company blog.

User interfaces for cloud services are typically boring, long lists of nodes, clusters, regions, proxies, users, snapshots, logs, and lists. Identifying patterns in the data is mostly a responsibility of the UI implementor, and not so much the consumer. When such an identifiable pattern emerges, implementors should come up with ways to break away from these long tabular data lists and display data in more valuable ways.

Tabular data is by its very nature repetitive and boring. There is nothing wrong with displaying boring data, but visualizations can certainly help identify outliers when we have long data lists.

The following screenshot shows a small fraction of a list of allocators, along with their health and available capacity. An allocator is a container that may host several Elasticsearch or Kibana Docker instances, and perhaps some available capacity. These allocators are sorted by available capacity, which becomes immediately obvious when we use a visualization to display how capacity is distributed in each allocator. The visualizations are relative to each other in width, so it’s easier to understand the relationship between different allocators in terms of total capacity.

Note that this is just the end-result of what we arrived at after around two weeks of on-and-off iteration on the design and UX of the visualization. Let’s go over that iteration process.

As usual, the design process started with a simple PR Kim made that displayed bars which depicted how full an allocator was relative to its total capacity.

Then Panos proposed using a color palette to illustrate breaks between different nodes.

Nice! Is it possible to get like a 1px divider per occupied capacity segment? Or an alternating color palette indicating different nodes and their size? i.e:

That ended up in a redesign Kim implemented, where he also made the full visualization width relative to the largest allocator’s total capacity. This redesign also helped get a notion of how many nodes an allocator has, and roughly how big they are. Kim’s PR got merged shortly after that, but I had my own ideas as well.

I removed the border used to display how much total capacity an allocator had, instead choosing to rely on a striped repeating linear gradient to represent available capacity. I also added tooltips that mentioned how large the nodes were, and made each slice in the visualization a link to that node’s view. The links turned out to be pretty useful, as they avoid going through an allocator’s page when we want to visit a particular node – especially when they’re large and thus easy to identify.

Then Alex came in with one of my favorite suggestions: using color shades per node size variation.

Could it make sense to have different shades of the same color per size? Instead of explaning, threw together this ugly example:

We experimented with color shading. A lot. At first we used the original colors Kim had used. Then I came up with a brighter color scheme, but that was too bright. Then we used some of the brand’s colors, and lastly I improved the shade generator algorithm quite a bit. 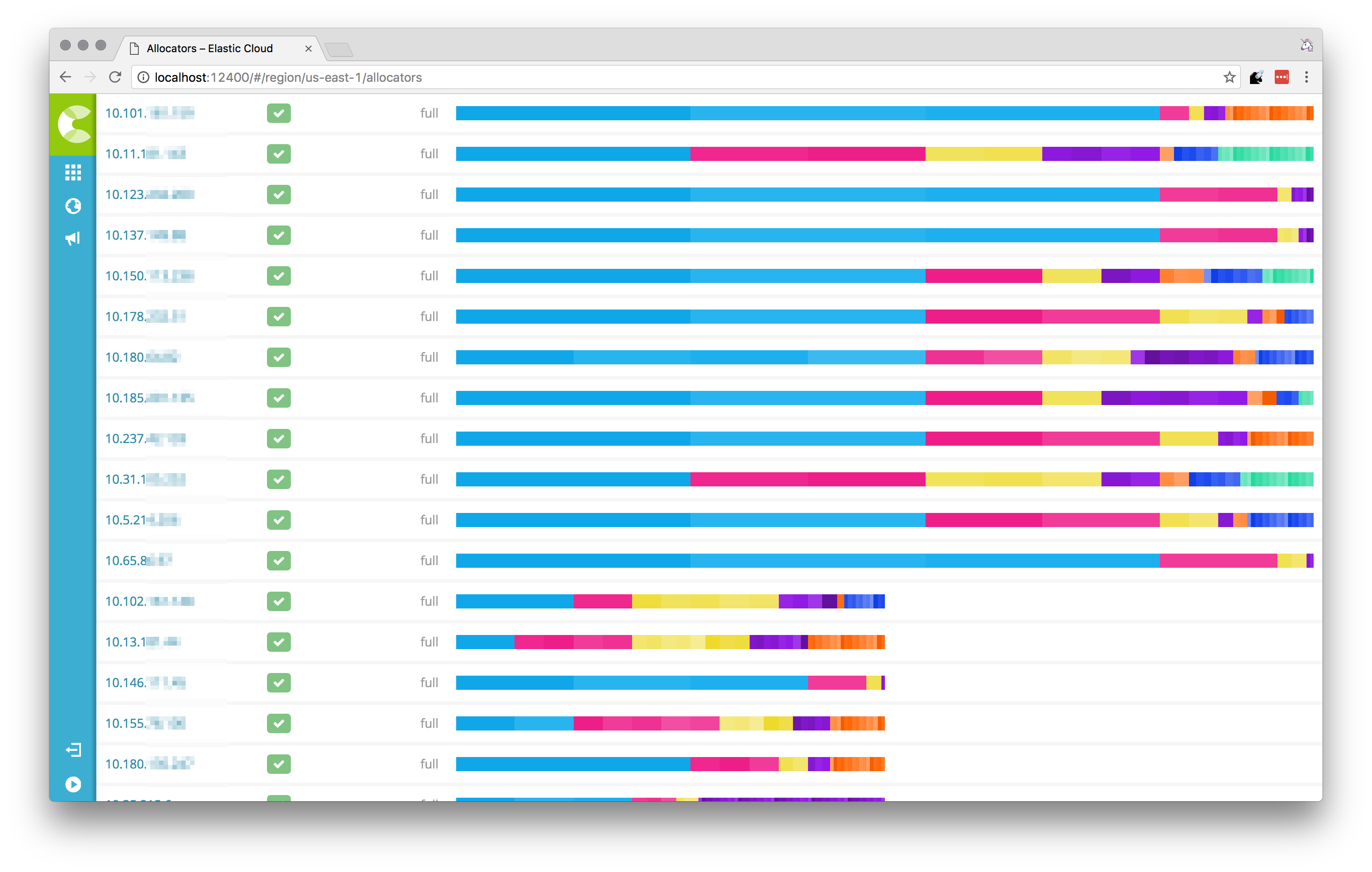 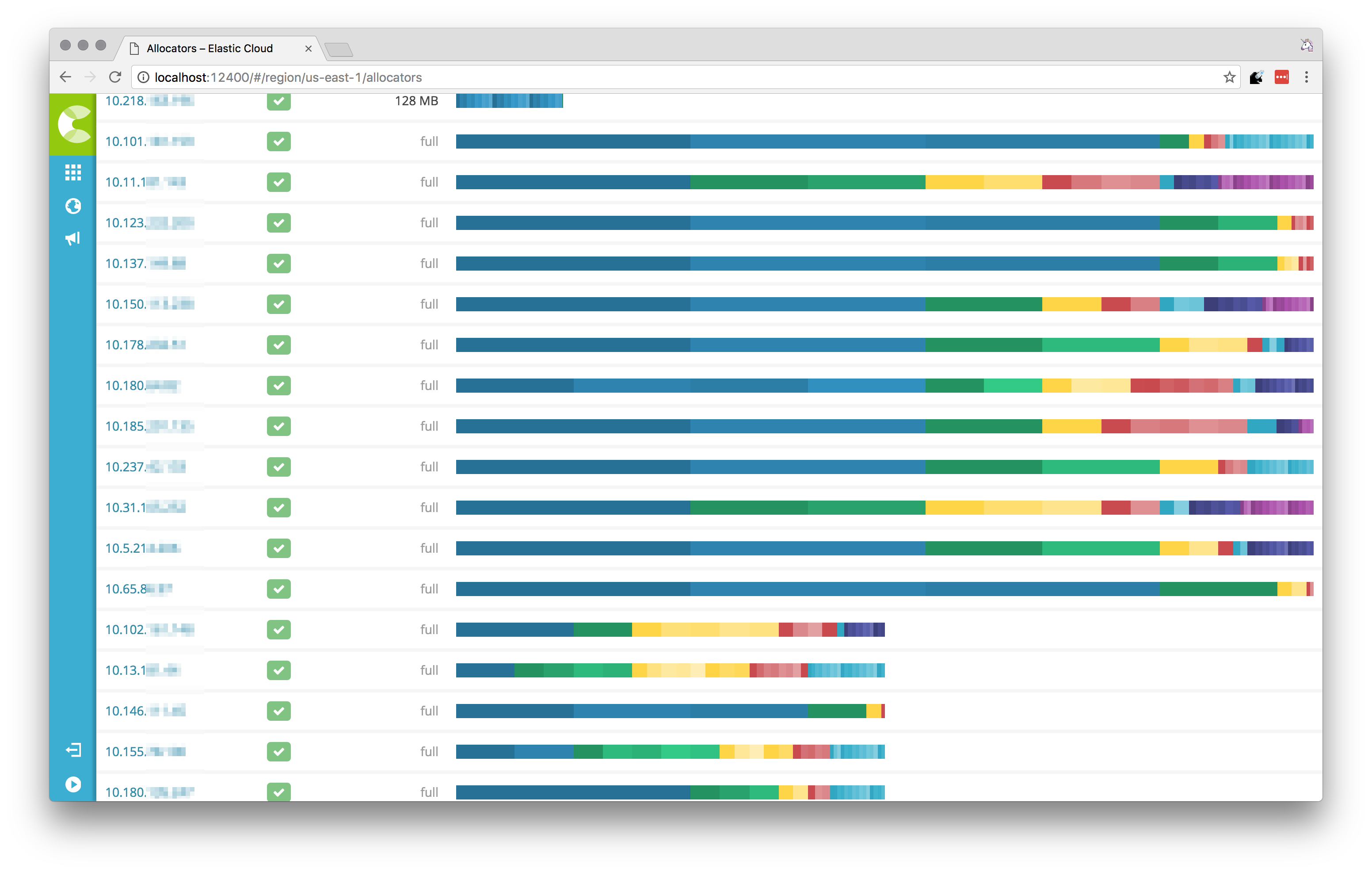 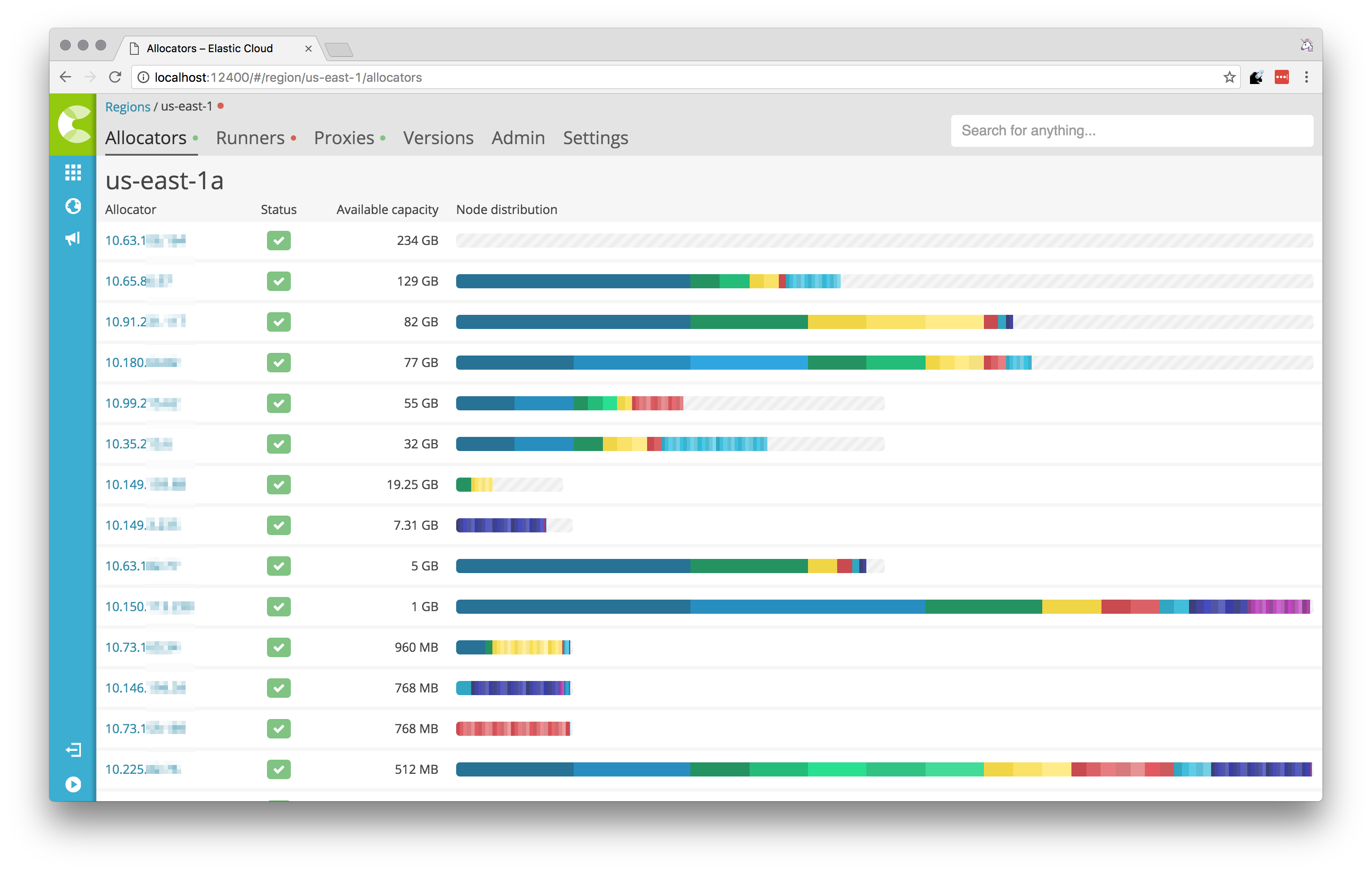 The design process is still ongoing – as you know, web applications are never really “done”!

We’re experimenting with a small line at the bottom that describes whether the node we’re illustrating is a Kibana instance or an Elasticsearch instance. This piece of work also normalizes colors so that all nodes of the same capacity use the same color – across all visualizations. Colors changed a bit, again, because bright contiguous shades of red, yellow, and green could be mistaken for cluster state. We’ve also added a legend so that humans know at a glance what each color means.

Let’s look at some code.

All of the colors and shades are produced by an infinite generator sequence. You can see a demo in action on CodePen. I’ll explain the code below.

First off, we import the color-ops package. This nice little utility let’s us perform basic color operations like spin, darken, or desaturate.

Next up we have a couple of utility functions to transform rgb components into an [r, g, b, a] array, which is the data structure color-ops relies on. The rgbString function takes the output from color-ops and turns it into a solid CSS color.

We’re finally getting to the generator code! Our generator is called capacityShader and it produces an infinite sequence, so we need to be careful about how we read values off of it, so that we’re not stuck in an infinite loop. The shadeIndex tracks what shade of the base color we should yield.

As you probably know, the % remainder operator returns the remainder of the division. We use this to cycle in the 0..baseColors.length range regardless of how large the currentColorIndex becomes, without having to worry about doing the cycling math by hand.

In the loop, we calculate a light index and an offset, which are used to generate slightly different variations of each color. The light variable sits in the 0..16 range, in 4 unit steps: 0, 4, …, 16. The offset value sits in the 0..2 range. Note how for indices of 0, our modifiers are also 0. This means any sequence begins using the base color itself. The combination of both offsets means there’s 15 possible shades of each color: light as 0..4 * 4 and offset as 0..2, so 5 * 3.

The light value will be used to determine what shade of the color we want, while the offset is also used to toggle saturation so that shades of the same color are less uniformly distributed, and thus easier to tell apart from each other. We use the Array#reduce waterfall to apply the color operations on the base color, and then round each component of the [r, g, b, a] result.

At long last, we yield the CSS RGB string version of the resulting color shade, suspending execution in the generator.

Then we just add one to the counter, and return to the top of the while (true) loop.

In order to consume the generator, we instantiate it and read the sequence by hand.

While we want a new shade of the same color, we keep calling g.next(). When we want to switch to a different color, we’ll need to create a new shader object. The screenshot below shows the generator in action, rendering each shade 15 times before moving on to a new generator. As you can see, the generators are deterministic in that the same shades are generated every 15 steps. Saturation offsets make it easy to notice the difference between consecutive shades of the same color. Compare the screenshot below to the previous screenshot, where saturation offsets hadn’t been introduced yet.

The other cool piece of code was something I dubbed the <NonBlockingRenderLoop> component.

There’s thousands of nodes in this page, which translates into thousands of DOM elements for the visualizations. As we were iterating on this page, we noticed a significantly noticeable performance drop that resulted in the entire page being frozen for several seconds at a time, as shown in the following performance profile taken during page load, as DOM nodes were being mounted.

My solution was to defer all visualizations by wrapping them in a magical NonBlockingRenderLoop component:

Afterwards, the UI stopped freezing for seconds at a time. Instead, non-critical work was deferred until after the rest of the UI loaded, and then it was only done progressively, not constantly. At the same time, the visualizations load fast enough that waiting for them to load doesn’t become an issue.

So how does the <NonBlockingRenderLoop> component work? The idea is fairly simple: any component controls when and how its children are rendered. If our render method returns null, then nothing would be rendered, but if we returned this.props.children then we’d render our child components. We could – for example – implement an element like the following, which would block rendering of any children for one second.

While this would be good enough to load non-critical components after critical ones, they’d still load all at the same time, which wouldn’t be very much of an improvement. Instead, I came to a solution that’s a bit similar, except that it relies on requestAnimationFrame and a lock. The way it works is:

In order for the lock to work across different component instances, it needs to be shared somehow. We could just add the locking functionality to our module’s top level, and then export the NonBlockingRenderLoop class, but that would mean there could only ever be a single category of non-critical components. Instead, what we could do is export a factory function that returns different component classes. This way, when we need different groups of components to load in separate asynchronous sequences rather than being blocked on each other, we could just wrap each component in a NonBlockingRenderLoop.

Going then to the implementation, let’s start with the skeleton. Here we’re just exporting the factory function, and returning a NonBlockingRenderLoop that may or may not exist in the cache. We’ll use a concurrencyLevel instead of a boolean lock, so that the component could be used to create asynchronous render loops that are able to render more than a single elements at a time.

Next up, we’ll define a few functions that manage the lock slots. We start at concurrencyLevel slots, which are taken by each component being rendered, and then released. We will consider the lock to be busy if there are no slots left.

Next up is the NonBlockingRenderLoop component. As we’ve done earlier, it starts on a wait state of true and only renders its children when wait is false. Instead of using a timeout, though, it calls a method named enqueue when it’s mounted. The enqueue method checks whether the lock is busy, in which case it uses requestAnimationFrame to trigger another call to enqueue. This loop goes on until a slot is released. When the lock is not busy, which is the starting state, we’ll take a slot from the lock and defer with requestAnimationFrame. Once the callback is executed we call setState to turn wait off, after which we release our lock on one of the slots. This process repeats itself until there’s no more work left.

Lastly, we have a sanity check at componentWillUnmount, where we call the stop method. This sets defer to noop and releases our lock on a slot if the component is still waiting to render. As an additional sanity check, we avoid executing the callback in the defer method if the component has been unmounted since requestAnimationFrame was called.

You can find the full source code on gist.github.com.

In the not-so-distant-future React’s next-generation renderer – Fiber – will help with these kinds of scenarios by allowing us to determine the rendering priority of different portions of our applications. Improving performance in these kinds of React development scenarios is about to become way easier!

Did React Fiber pique your interest? Here you go. Some of these are long reads — or presentations —, but they’re well worth it. Take your time to dig through these links.

By the way, if you got this far, you may be interested in the remote senior JavaScript engineer position at Elastic! We’re always looking for smart and talented individuals like yourself.