I got married last friday, and then we threw a party on saturday. I wanted to extend the celebration a little bit longer by sharing a few pictures on my blog, so here we are.

Several years ago, a friend and I created a Facebook group where people could share links to newspaper articles that shouldn’t have existed, such as “How mighty is the Flying Spaguetti Monster?”, “Director releases seven-hour trailer… for film that lasts 30 days”, and other gems. The group became quite popular and nowadays it has ~2500 members just because of word of mouth.

My friend added one of his friends to the group, who in turn added a friend of his, who added his sister, who is now my wife. Marian’s brother went away for a few days right after adding her to the group, and I joked he had created an alt account to appeal to the male audience.

She was far and away the funniest of the bunch, always making me laugh with clever comments on some of the absurd news that were posted to the group. Eventually, I asked her out, and as they say, the rest is history.

She turned out to be the sweetest person I’ve ever met. I wouldn’t change her for the world. Apart from being a couple, she eventually became my best friend (even if that sounds quirky) – although maybe that happens to most healthy couples! I could also mention she’s gorgeous, but the pictures will do that on my behalf – even though she claims not to be photogenic. Did I mention she makes me laugh? That happens pretty much continuously! 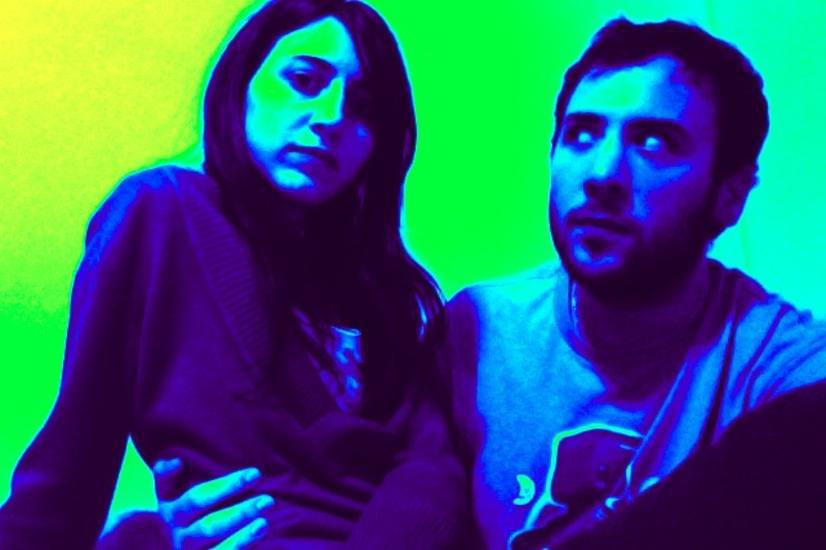 Us, fooling around with iPhoto.

One year, for christmas, I came up with this idea of making a terrible computer game for her. I picked Microsoft XNA – because I had never used it before – and came up with a 2D platformer game over the weekend. It even included some sound effects which were basically sound recordings of myself saying "argghhhh!" when her character died. Of course, it’s all open-source! 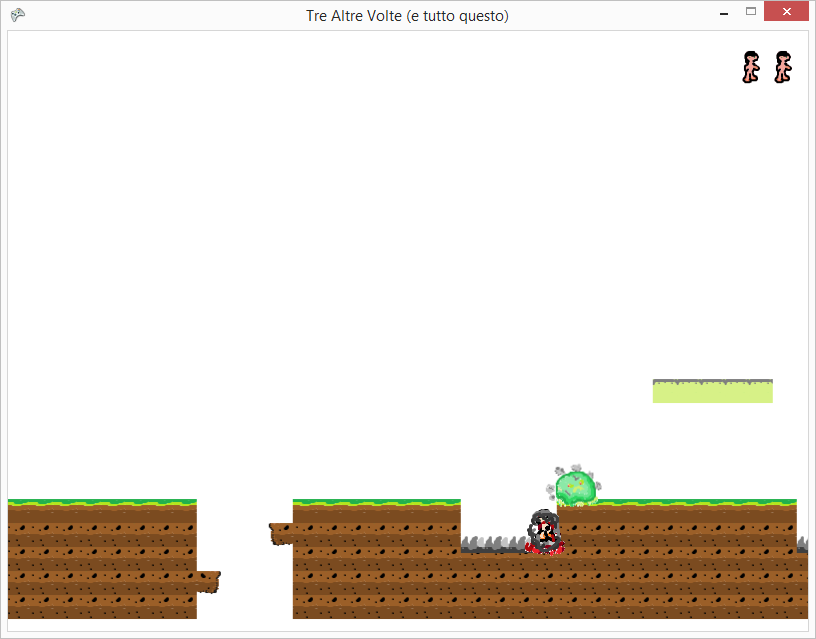 It was basically a Super Mario rip-off with only two or three levels. I spent way too much time planning and tweaking her death animations.

At one point, we were spending so much time together that our log of dates ended up being flushed during the day or two of the week we didn’t see each other.

I’ve always been pretty self-immersed, and also started blogging around the same time we started dating. I started writing my first book not long after, and as any author can attest to: writing a book while keeping up with a day job is hard on a relationship that just getting off the ground!

Nevertheless, she stoically stood by me as I wrote page after page. Some days I spent more time chatting with my editor than with her! Those days are over, and after a month of struggling to get the book through customs, she got to read the wedding proposal I wrote for her in the dedication of the book.

We’ve been going out for over three years, living together for two years, and now married for less than a week (so far!).

On a related note, my amazing editor – Susan Conant, now with O’Reilly – was amazing and came to the wedding party all the way from the US!

I almost forgot to mention we put together a small website for the wedding! It even had an english version – because of Susan coming to the wedding, we didn’t want to make her feel left out! 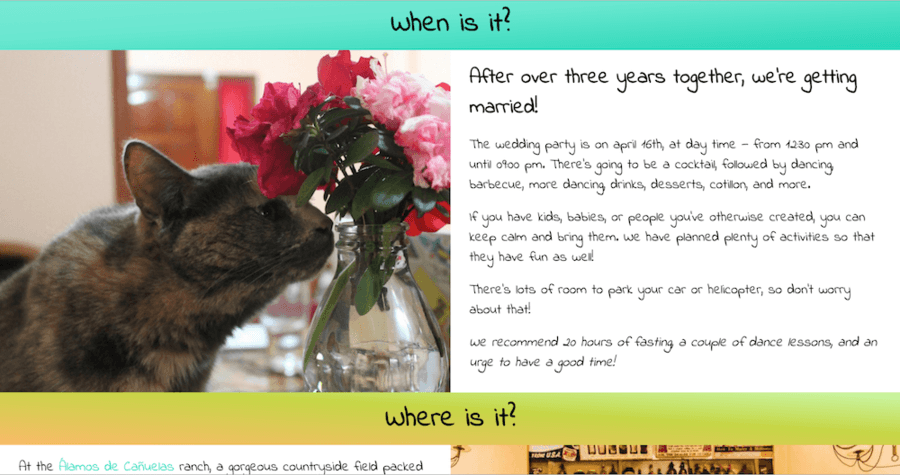 under the rain. Every weather forecast (except for one!) assured there’d be thunderstorms 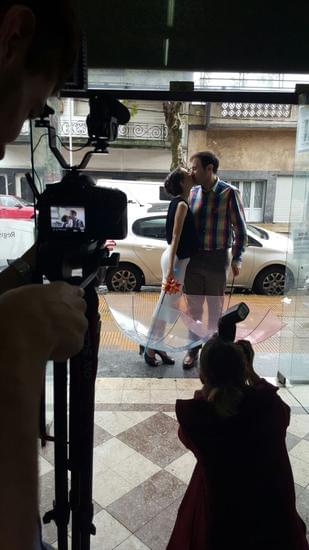 Rain wasn’t going to stop us from having fun!

Not sure if this is a thing in other parts of the world, but in

people shower you with rice. Marian dyed some rice so that it’d look better, and so the rice also matched my shirt – which, I guess, matches this blog! (probably why I bought the shirt). 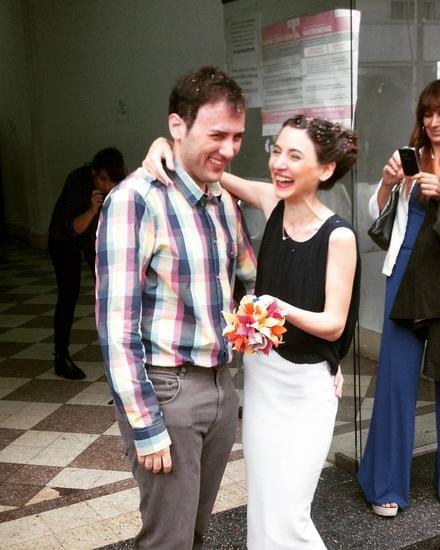 Marian and myself after the civil wedding.

We held the wedding party at a beautiful ranch in the outskirts of Buenos Aires. There wasn’t a single raindrop, nor thunders, anywhere in sight. The whole day was relatively sunny, not windy, and just perfect. Everyone joked that their “salt crosses”, eggs under their beds, and other myths had worked their magic to prevent the rain. After the wedding, in her own usual and cutesy way, Marian said to me: “you know, we’re such good people, we didn’t deserve the rain!”, and she made me chuckle. Like she does. 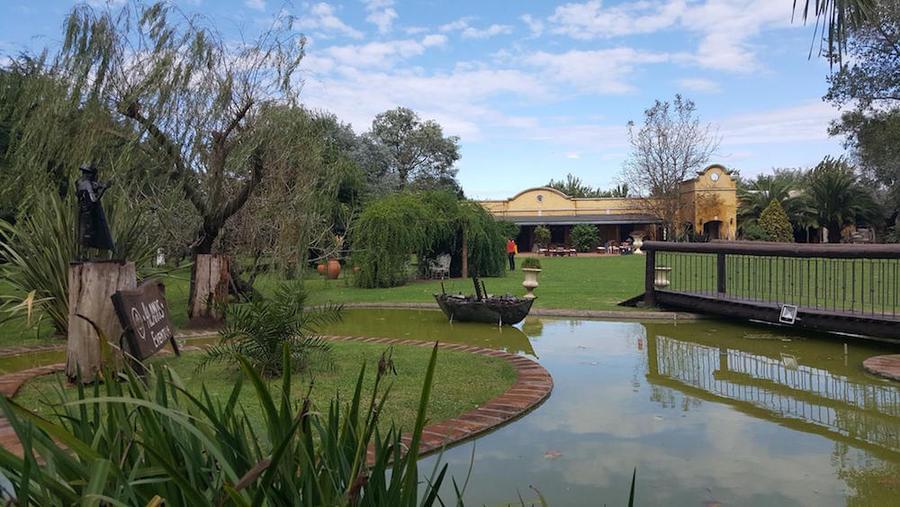 A photo of the ranch while they were preparing the final details for the event.

There were quite a few animals roaming around the ranch. It was a great thing that it didn’t rain

, as that would’ve made them look for shelter, staying away from partying humans. The picture

below shows a few turkeys. There were also many chicken, a peacock, and a few others. A chicken was sighted eating chicken-flavored empanadas 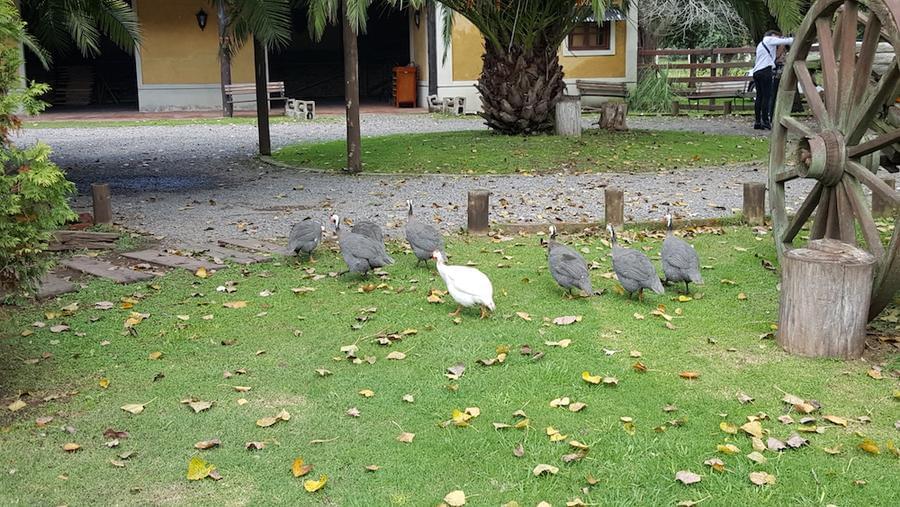 Some of the turkeys roaming around the ranch. Kids loved these guys. Maybe a little too much! Chasing ensued.

We hosted a little symbolic ceremony (neither of us are religious), that was filled with words of love, smiles, and a particularly breath-taking wife! It was one of those moments were almost everyone ends up crying, but in a good way. 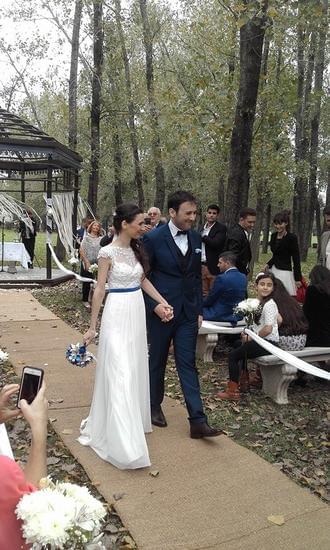 There was some wind that morning, but it was everything you could ask for!

After the ceremony, we went to take some photos around the ranch, while the crowd grabbed a bite to eat. 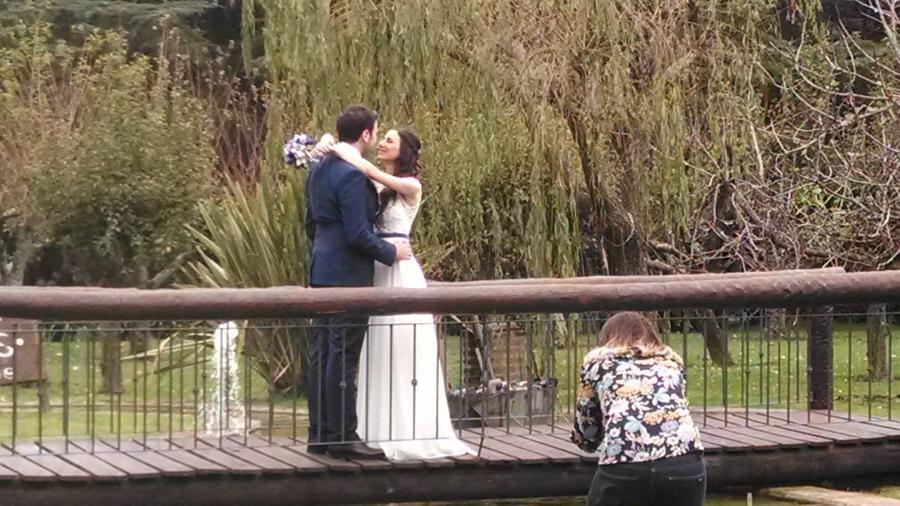 There were several different locations you could take great photos at. That place was so nice!

We must have watched Up at least half a dozen times since we were first dating, and we got ourselves the absolute best looking Up-themed cake we could get. Much to our surprise, it was actually edible and very tasty at that. It also took four people to cut pieces of the cake

, and it never crumbled! 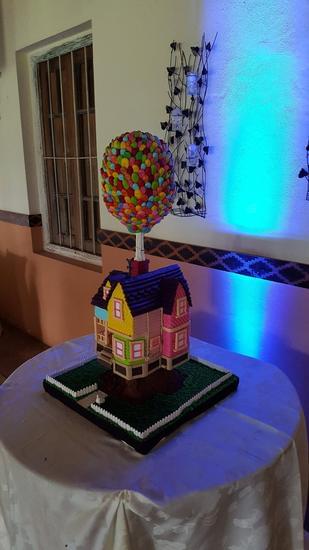 The cake pretty much set the theme for our whole wedding party. Once we had that, we went with an assortment of colors for some balloons to be placed in the hall, and every table had a different color too. 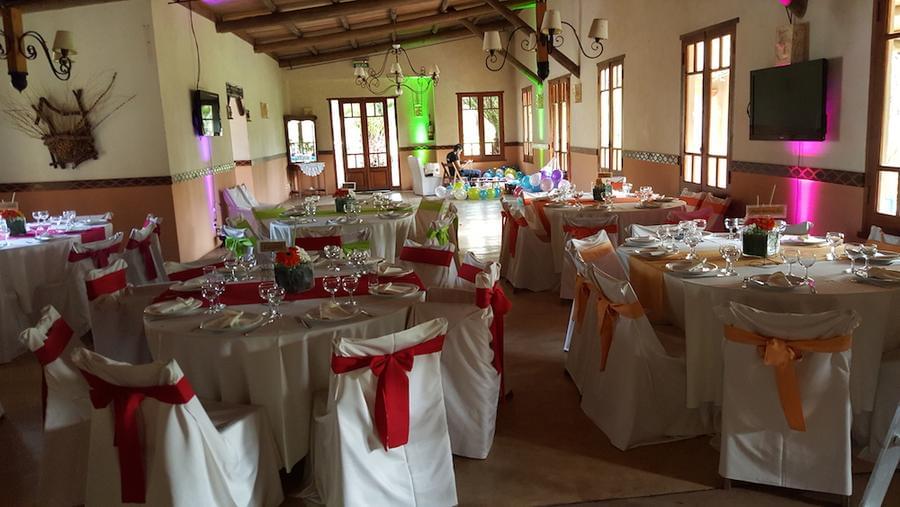 The ranch owners agreed to pretty much every wild idea we had, so the party went exactly how we wanted.

When it came to the hall, we kicked things off showing a video of the civil wedding and then went into the venue playing a little choreography using the Don’t Stop Me Now song. If you know me at all, you know how terrible I am at dancing. It took quite a few sessions for Marian to teach me just enough so that I could perform at the wedding. It was super fun, and I wasn’t as nervous as I had expected! I guess I was just too happy to care.

Dancing to the tune of Don’t Stop Me Now!

Obviously, we danced a lot more than that! Here is a photo of us opening up the Vals session. 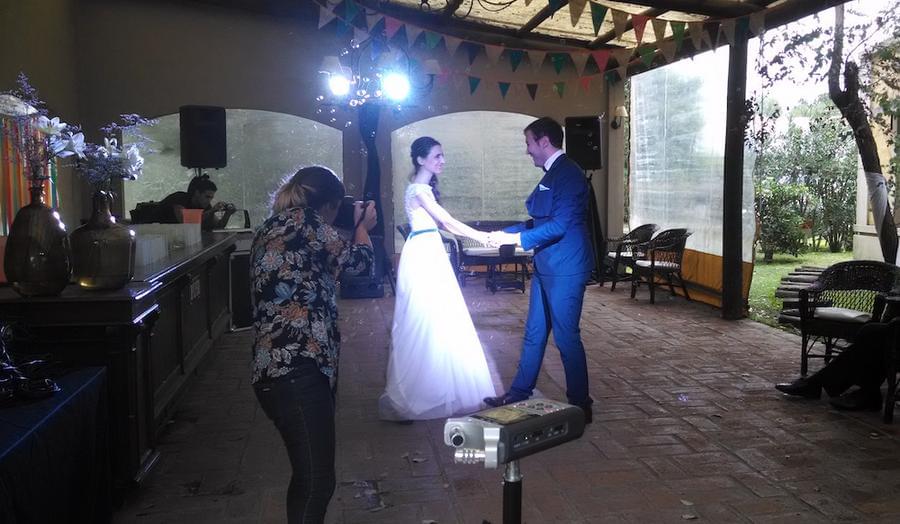 I don’t think I can find a picture where I wasn’t smiling profusely!

At big ceremonial parties in Argentina – such as wedding parties or “Quince” (when women turn 15 years old) – there’s this “Carioca Carnival” tradition where we wear silly props like ridiculous hats, maracas, little trumpets, and other similarly funny items towards the end of the celebration. 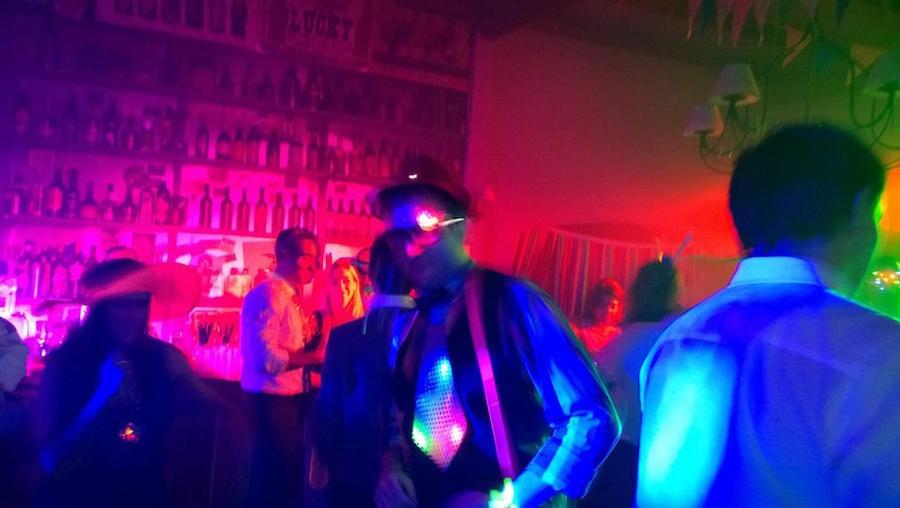 It was a day to remember. 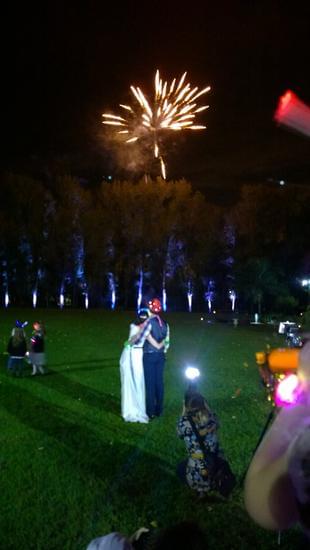 The closing party. Fireworks were had.